The Wonderful Wizard of Za

A mysterious pizza purveyor is about to go public with his creations
By Anna Kurfees / Photography By Blake Needleman | September 03, 2020
0 Shares 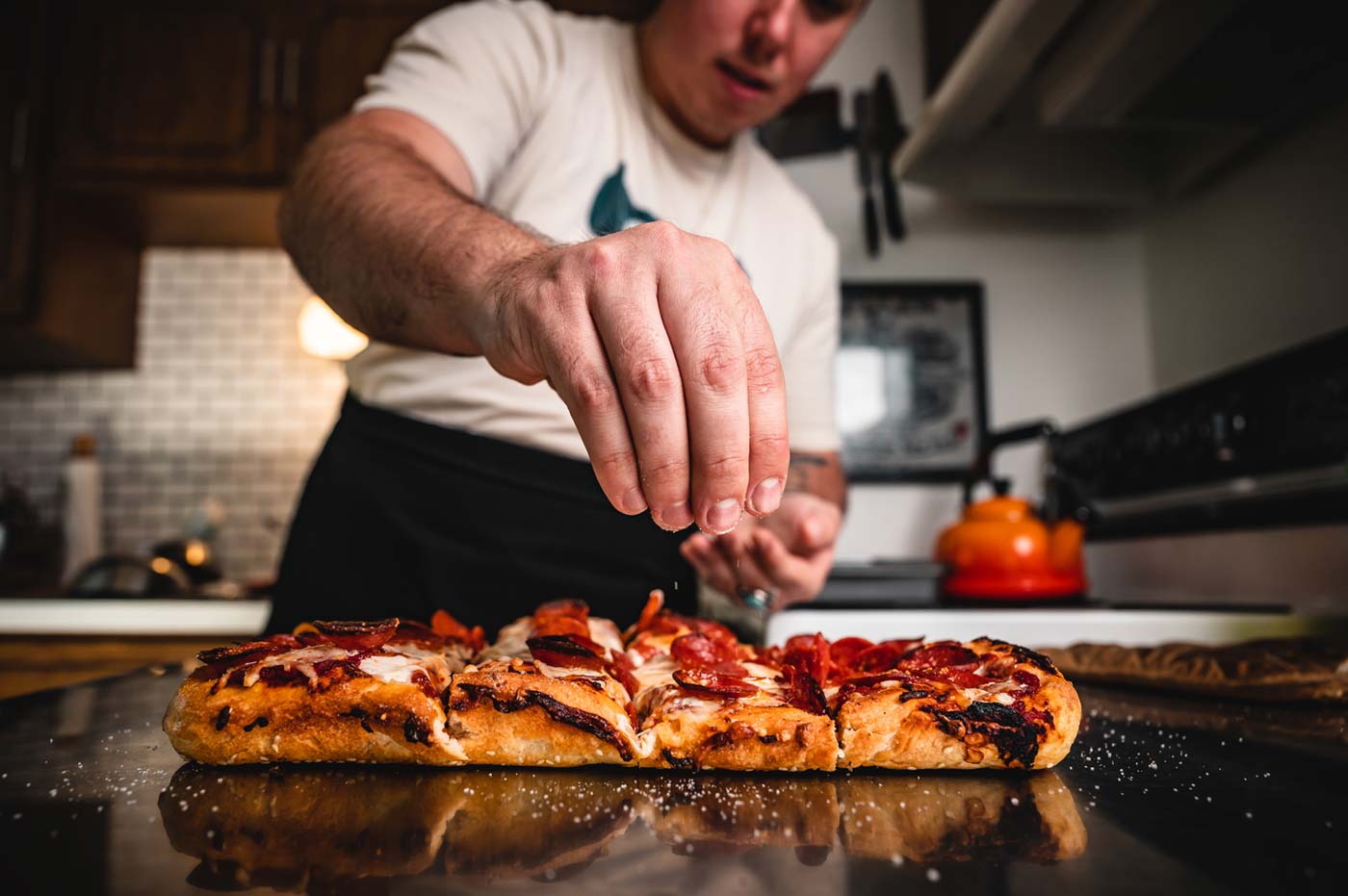 The Wizard of Za adds final touches to one of his signature hand-made pizzas.

He has a 2,200-plus-person waitlist and nearly 13,000 Instagram followers, and the demand for his pizza is spreading like wildfire. But who is the man behind the curtain? His name is Spencer Saylor, better known as the Wizard of Za. Demand for an opportunity to devour a pizza from the Wizard has exploded across social media channels and via word of mouth. The Wizard of Za Instagram features customers ranging from friends and family to celebrity chefs, Hollywood actors and professional athletes including the Columbus Blue Jackets. The question lingers among fans and followers: Who exactly is Spencer Saylor, and how did this all come to be?

Born in the Italian hub that is Youngstown, Ohio, Spencer has fond memories of making homemade pizzas with his dad at a very young age. Every corner of Youngstown is home to some version of a pizza shop or Italian kitchen, and Spencer says the love of homestyle cooking and Italian cuisine practically runs through his veins. After becoming a Columbus transplant, he realized how much he missed the amazing Sicilian-style pizza from back home, especially after not being able to find something similar in Columbus. 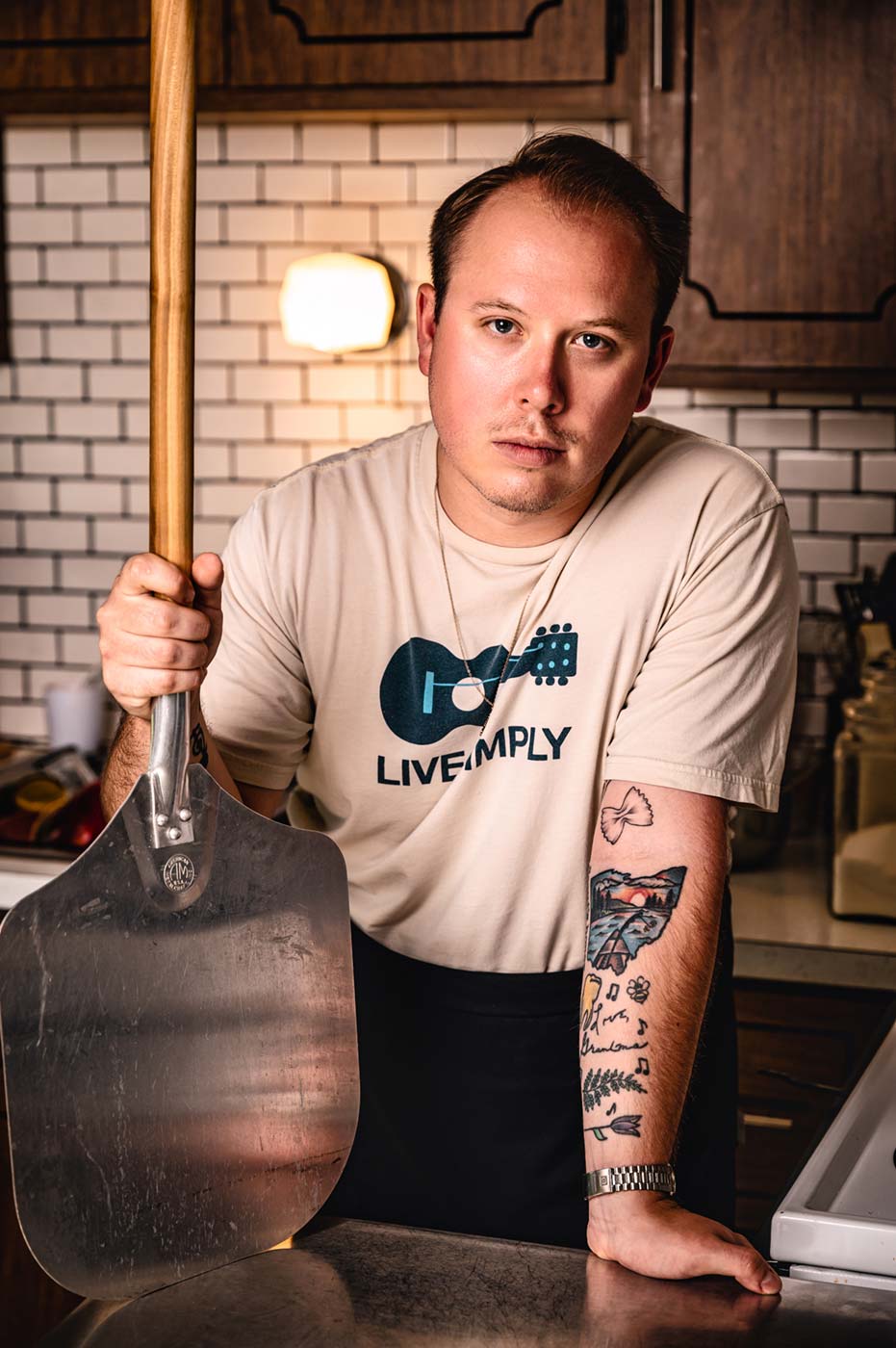 Spencer Saylor is getting ready to take his pizza peel out into the commercial world as he plans a Clintonville shop.

Asked how he would describe his style of pizza, Spencer said he refers to it as “comfort pizza.” Although his pizzas are technically classified as Sicilian-style, he has created flavors that are comforting to the soul, with the hope that customers will feel a sense of nostalgia. The uniqueness of a Sicilian-style pizza is the focaccia crust—crispy bottom, thicker crust, but fluffy and airy on top. Spencer makes this delicious dough from scratch and, after one bite, it’s hard not to be addicted. Notably, Spencer’s signature pizza sauce and the mozzarella cheese are also homemade. When topped with local ingredients and fresh basil, each bite leaves you craving more.

Spencer also makes a vodka sauce pizza—which is a rarity, especially here in Columbus. He said during his travels for developing his pizza concept, he tried a slice of vodka sauce pizza and knew he had to have it on the menu. When talking about what sets him apart, Spencer said he truly believes it’s the love and passion he has for his craft. You can taste the time, effort and care that has been put into every slice, especially with so many homemade ingredients incorporated. The quality, sourcing and balance of each ingredient is meticulously thought out and tested to perfection.

That testing process has been going on since Spencer began slinging homemade pizza in early 2018. All of 2019 was dedicated to perfecting the dough and sauce recipes, and it wasn’t until late January of this year that he felt ready to share his pizza with the public. And “public” at the time meant close friends and family. He already had been sharing photos of his favorite pizzas from his travels on the Instagram account @wizardofza, so he decided to start sharing his own pizza creations there as well. For the uninitiated, this is now where he accepts orders for his famous pizzas. A simple direct message to his Instagram account secures your spot on the ever-growing waitlist. 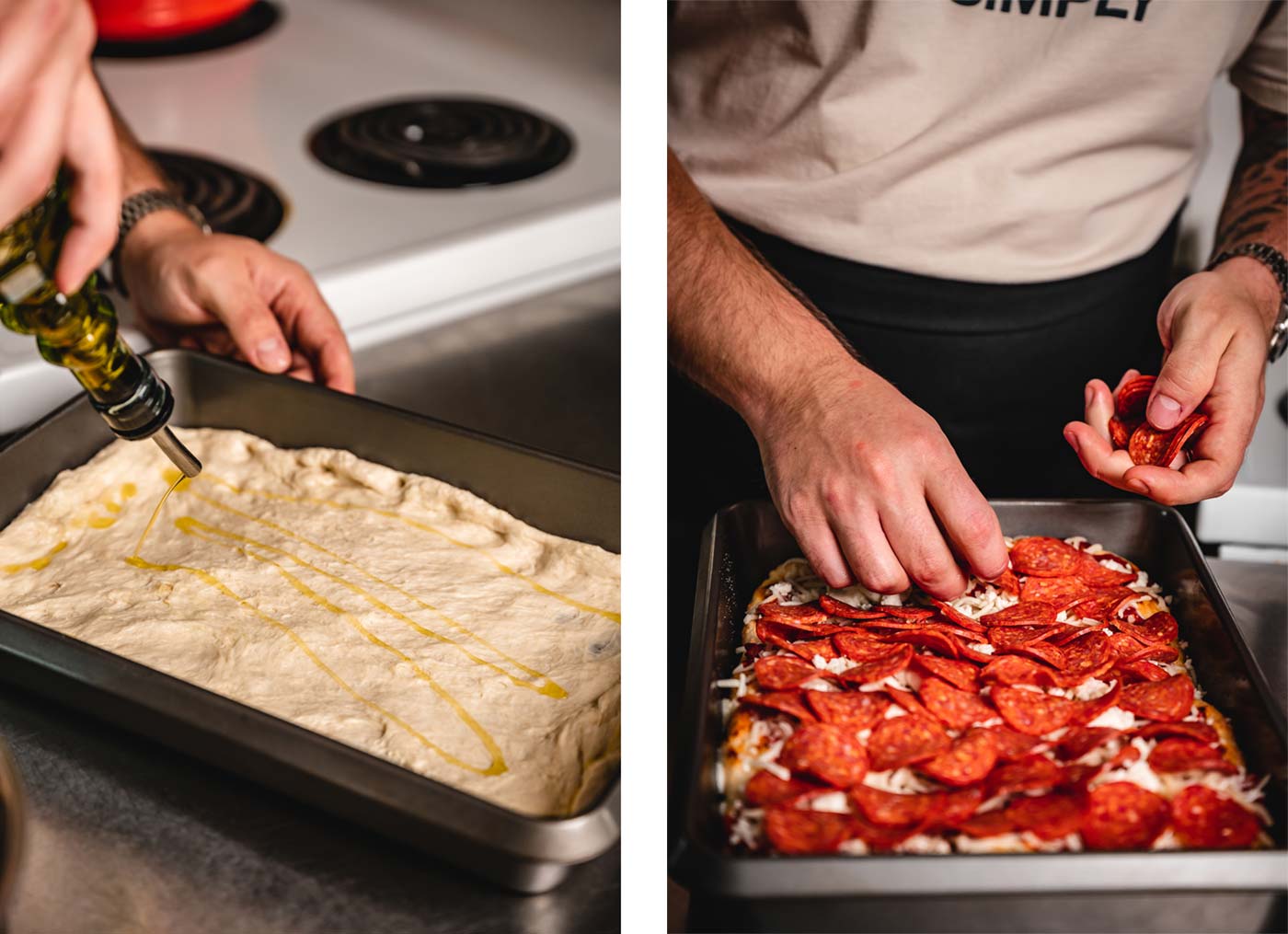 Every pizza begins with focaccia dough made from scratch. Toppings are added by hand over the homemade pizza sauce and mozzarella cheese. 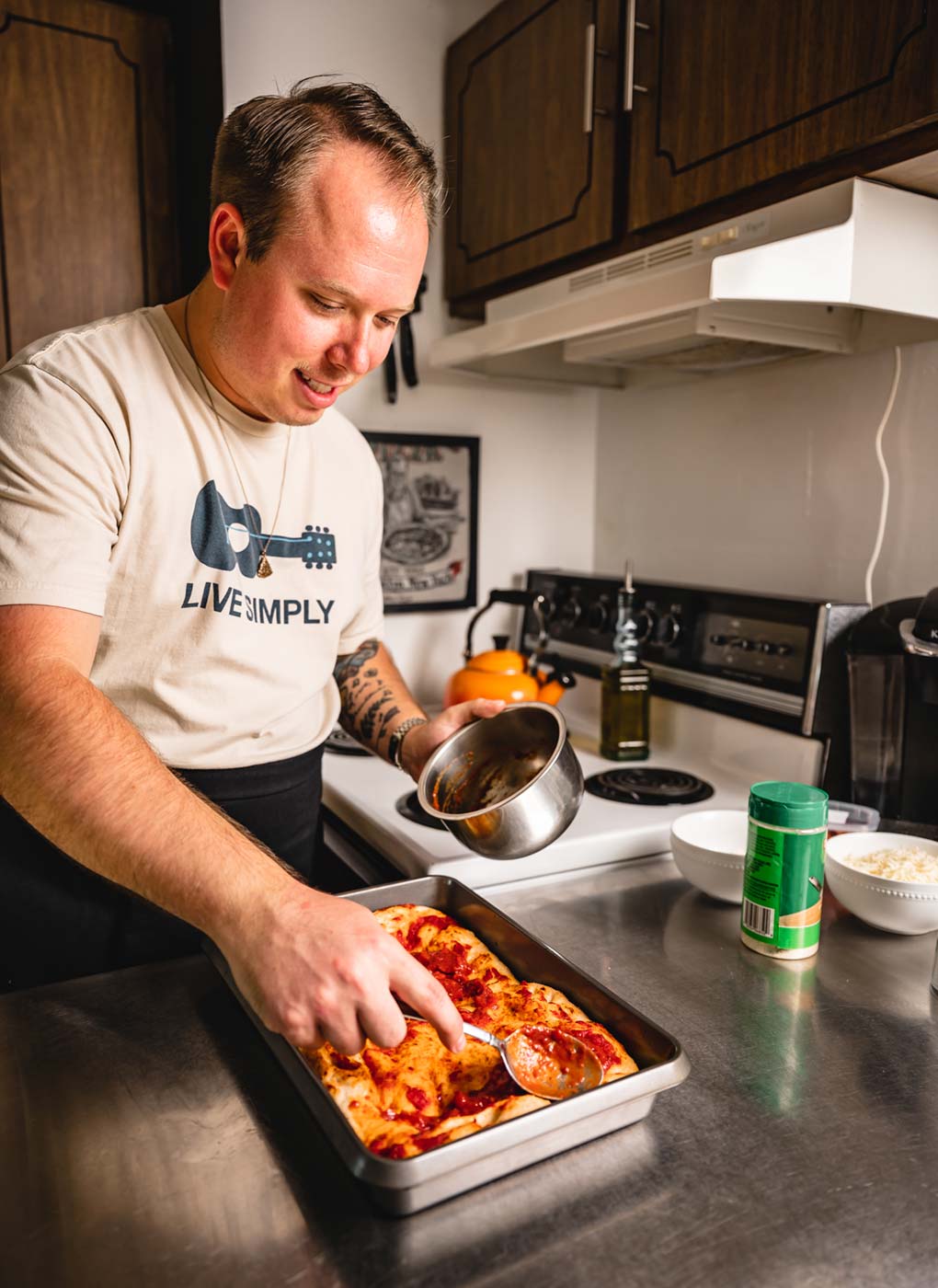 Spencer has been turning out pizzas one at a time to meet the growing demand.

Until recently Spencer was still working a full-time job. Because he is a one-man show and uses a hand-crafted approach, you may have to wait a little extra time for your delicious pizza—but it is well worth the wait. Spencer recently announced that he will open a brick-and-mortar location. While there’s no exact opening date just yet, Spencer plans to open up shop in Clintonville and will keep the name Wizard of Za.

If you have made your way onto the waitlist, don’t fret. Spencer will be honoring the entire waitlist even as he moves into a public space. Spencer said he fell in love with Clintonville’s brand—all about community, accepting of everyone, and an emphasis on local support. These attributes represent and define Wizard of Za as a whole, making the Clintonville neighborhood the perfect location to lay roots. Additionally, the central location will make his shop accessible to residents across Columbus. Wizard of Za will start off being carryout only.

When asked about some of the biggest successes he has experienced in the past few months, Spencer said it’s not exactly what one might think. While he’s infinitely grateful for the large following, celebrity customers and high demand, he said, “I love bringing smiles and happiness into the homes of families and residents of Columbus. As long as I’m able to do that, I think that’s my biggest success.”

Spencer has his work cut out for him as he moves through the process of opening his own shop, but the response so far shows that Columbus is more than ready for the Wizard of Za. 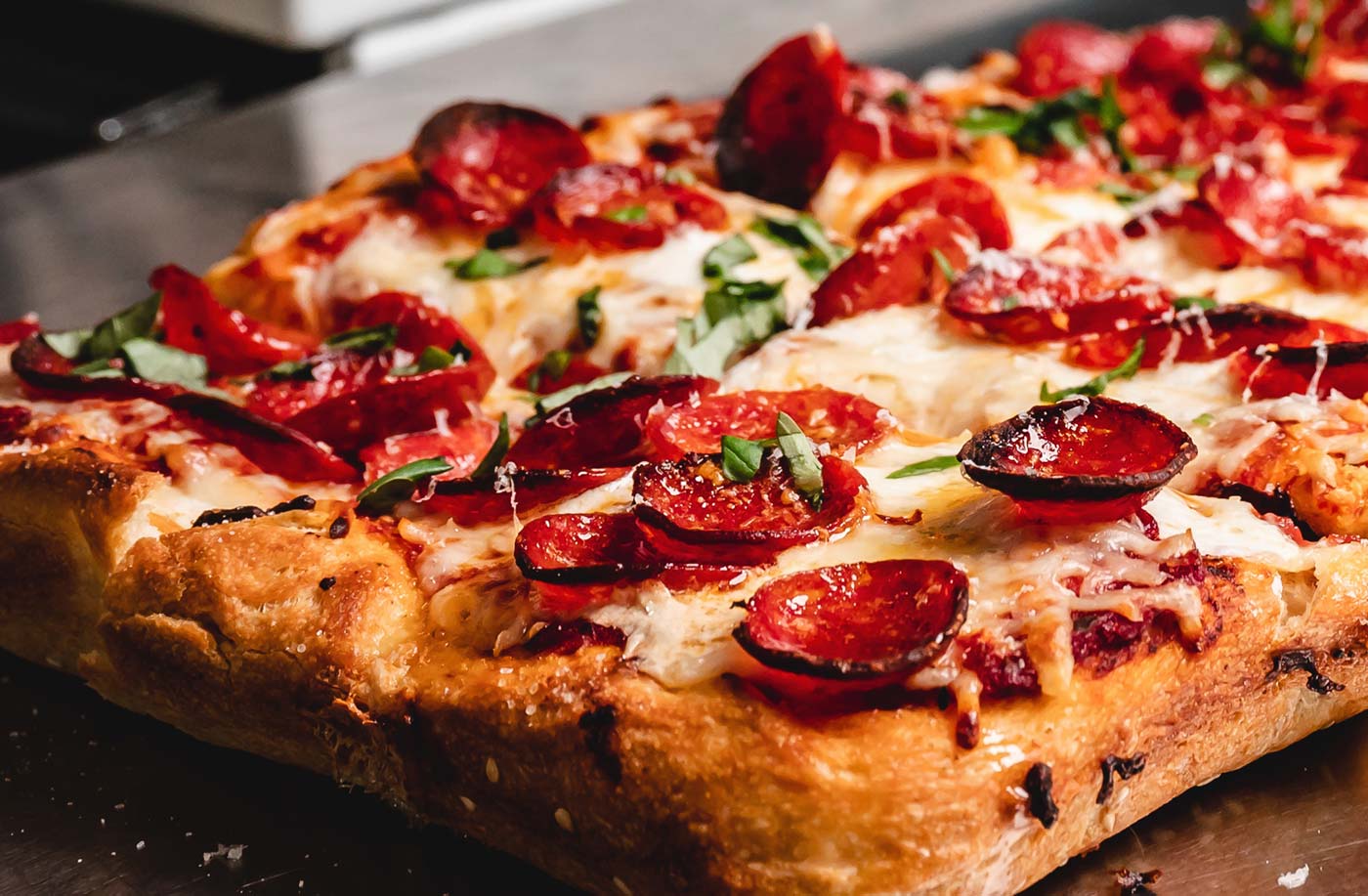 The Wizard began making his own Sicilian-style pizzas because he couldn’t find anything quite like it in Columbus.

see all
Article from Edible Columbus at https://ediblecolumbus.ediblecommunities.com/eat/wonderful-wizard-za

Get seasonal recipes, local food events and more in your inbox